He said to me, “There’s been a bank robbery and you fit the description.” Imagine the magnitude of those words as told to a person who has just spent just two weeks in America for the first time. By none other than a cop.

Now that’s a glimpse into the confusion and shock Okey Ndibe experienced as he stood face to face with an American officer on the street as he was being mistaken for a suspect in a bank robbery which he didn’t participate in nor had any idea that it had even happened. I haven’t even told you yet about how he couldn’t look the officer in the eye just because his Nigerian uncle, riding on cowboy Hollywood fanaticism had told him that it was great a sin payable by death if you looked an American in the eye. Gun slinging.

I definitely cannot tell you the whole story but you can get it in Okey Ndibe’s memoir, ‘Never look an American in the eye.’

This was at the reception for Nigerian American writer Okey Ndibe hosted by the US Embassy Public Affairs Officer Ronald E. Hawkins Jr. with a few other select writers, poets and book lovers. He had been flown in as a guest tutor for the Professional Training Workshop for Creative Writers organized by the African Writers Trust though this was his second visit to Uganda, the first one being in 2002 for FEMRITE still through the arrangement of the US Consulate.

The party, opened with a light speech from Mr. Ronald, started off with an exclaimed remark of appreciation in the way the guests kept time, a thing that has commonly eluded Ugandans for a very long time. Maybe it is because we as creatives have attained a greater respect for time due to our relationship with multicultural/ dimensional and usually hair raising time schedules. It is crazy. 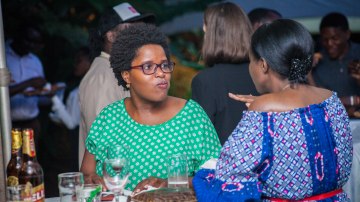 Okey, taking over from Ronald called it magic. He also added that that is what writing represents for him. How it has enabled him to travel around the world, meeting warm people, Ugandans inclusive. A passionate people (Ugandans) about literature and a country with a lot of food though his size has betrayed his culinary appetite. He even hinted about gaining citizenship here. Wouldn’t that be a blessing? I know.

Apart from ‘Never look an American in the eye’ the MFA and PhD degree holder from the University of Massachusetts at Amherst, Okechukwu ‘Okey’ Ndibe is a highly educated, decorated and celebrated author of a number of other bestselling novels like Foreign Gods and Arrows of Rain. He has tutored in great academic institutions as well as worked with a number of other celebrated personalities and projects like Chenjerai Hove of Writers Writing on Conflicts and Wars in Africa and Janet Maslin of The New York Times as well as Philadelphia Inquirer, Cleveland Plain Dealer, and Mosaic magazine which named Foreign Gods, Inc. One of the 10 best books of 2014. He has had his opinion pieces published by numerous publications, including The New York Times, BBC Online, Al Jazeera Online, Financial Times, Fabian Society Journal, and the (Nigerian) Daily Sun and is currently working on a novel titled Return Flights as well as a non-fiction book, Going Dutch and other American Mis/Adventures, a series of essay vignettes based on his immigrant experiences. 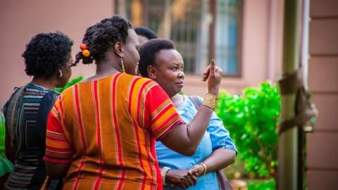 As the floor was opened for our enjoyment, people did not hesitate to catch up with friends and interact with some of their favorite writers, bloggers, dramatists and poets. Since connections are key in this industry, the people surely did not disappoint as they exchanged contacts, creative tips and skills as well as their sites and platforms on which they share their work. And neither did the deejay as he kept the mood lively on the low key with his excellent music variety that wafted through the gardens nearly tempting some of us into losing ourselves. It took some level of self-constraint to suppress the urge to get groovy. By the end of the cool evening interaction, having been treated to a constant flow of different tribes of foods and drinks, we left on time (as well) pregnant with creative contacts, skills, tips and friends. Plus selfies and photos of course. It’s the new norm.

For the love of it all I am a writer (reason why I am here anyways), a dancer (enjoying my retirement) a TV presenter (3 stations back) and just a random guy. View all posts by Shadray